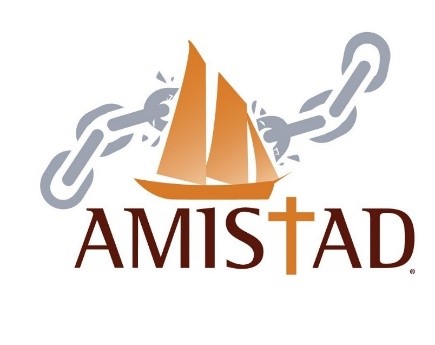 The International Labor Organization estimates that there are nearly 25 million men, women, and children subjected to labor or sex trafficking worldwide. Though human trafficking is a global issue, its effects are much closer to home than you may think. People are trafficked everyday in almost any industry and city.

Like the captives aboard the Amistad slave ship who revolted and won their freedom, the Amistad Movement seeks to empower immigrants in at-risk communities with the educational tools to protect their own community members from falling victim to human trafficking.

The Amistad Movement seeks to:

The Amistad Movement is inspired by the Catholic social principle of subsidiarity, which teaches that the best solutions to local problems arise from, and are led by, the members of affected communities. The Movement leverages the talents and gifts of immigrants themselves to effect lasting change in their communities, recognizing that their initiative arises from intimate knowledge of factors that make their communities vulnerable to human trafficking.

Welcome! The guides, presentations, and other materials below seek to educate IMMIGRANT communities about human trafficking, and how to respond to what Pope Francis describes as a “wound against contemporary society”. The resources are to help you with awareness raising and community engagement. While the program is designed for an immigrant community, and “Amistad Educators”, you do not have to fit this description in order to access and benefit from the materials.

Before you begin your journey as an Amistad Educator (or an interested community member), it is important that you have a general understanding of what human trafficking is. You are not expected to become an expert on the topic, but having basic knowledge of the myths, misconceptions, and the reality of human trafficking will help you during outreach activities and information sessions. This short unit provides a Human Trafficking 101 presentation and script. The information provided is typically the first step in educating yourself about the reality and misconceptions of human trafficking so you can teach others, whether that be friends, family members, neighbors, or local community members.

Now that you have familiarized yourself with important facts regarding human trafficking, you’re ready to begin educating your community! This section provides resources to assist you in your efforts. From conducting outreach to delivering information sessions, the Amistad Leader Guide and Community Outreach Module will be with you every step of the way. Your groups can be as small as 5 people or as large as 50, there is no standard audience size!

Labor and sex trafficking can occur almost anywhere. For this reason, it is important to educate your community about the different industries where it is present. These presentations cover everything from agriculture to hospitality, pointing out the characteristics and challenges of exploitation and trafficking in each industry. There is also an Amistad workbook that can be used as a complement to the introductory presentation – Human Trafficking 101.

Spread the word about Amistad and help raise awareness in your community by distributing these resources! This section offers an array of materials to use or distribute during information sessions, after Mass, at community events, festivals, bulletins, and at local stores and restaurants (with the owner’s permission, of course). These resources offer information about workers’ rights, the national human trafficking hotline, trauma experienced by victims and survivors, and more.

The Amistad Program is supported by the Anti-Trafficking Program of the U.S. Conference of Catholic Bishops (USCCB).