Refugee Resettlement: The Who, What, Where, When & Why

Refugee Resettlement: The Who, What, Where, When & Why

What is a Refugee?

Refugees are defined under international law as being outside their home country and having a well-founded fear of persecution based on race, religion, nationality, political opinion, or membership in a particular social group. The United Nations 1951 Convention Relating to the Status of Refugees codified this definition and was augmented by a 1967 protocol broadening refugee recognition beyond an initial focus on Europeans displaced after World War II. At present, 148 nations are parties to either the 1951 Convention or the 1967 Protocol, the text of which can be accessed here.

How Many Refugees Are in the World?

According to the United Nations refugee agency (UNHCR), 65.7 million people have been forcibly displace worldwide, with 22.5 million considered refugees. Of that total, 28 million are child refugees who fled conflict, states a 2016 UNICEF report.  An additional 20 million are child migrants who left their homes in search of better lives. About 80% of the world’s refugees are hosted by developing countries. The largest refugee producing countries at present include Syria, Afghanistan, Somalia, Sudan, South Sudan and the Democratic Republic of Congo. To learn more about the world’s refugees, visit the U.S. Committee for Refugee and Immigrants (USCRI) or UNHCR’s “Statistics” Web page.

When did U.S. Refugee Resettlement Begin?

The U.S. admitted more than 250,000 displaced Europeans following World War II, after which the U.S. Congress enacted the Displaced Persons Act of 1948 allowing an additional 400,000 European refugees to resettle in the U.S.This legislation was followed by later laws admitting refugees from Communist countries such as China, Cuba, Hungary, Korea, Poland and Yugoslavia.

How Many Refugees Live in the United States?

Since 1980, when formal U.S. refugee resettlement began, about 3 million refugees have been invited to live in the United States.

How Does U.S. Refugee Resettlement Work?

Each year, the President of the United States consults with Congress to determine the regional number of refugees to be admitted into the country during the federal fiscal year. Over the past decade (2007-2017), this presidential determination has allowed for up to 48,000 (2007) – 85,000 (2016) refugees to enter the U.S. These numbers represent a ceiling rather than a quota, thus the actual number of resettled refugees varies each year. For a chart of refugee admissions into the U.S. since 1975, click here.

The graphic below explains the resettlement process from the perspective of an individual refugee.

How do refugees get to the United States? 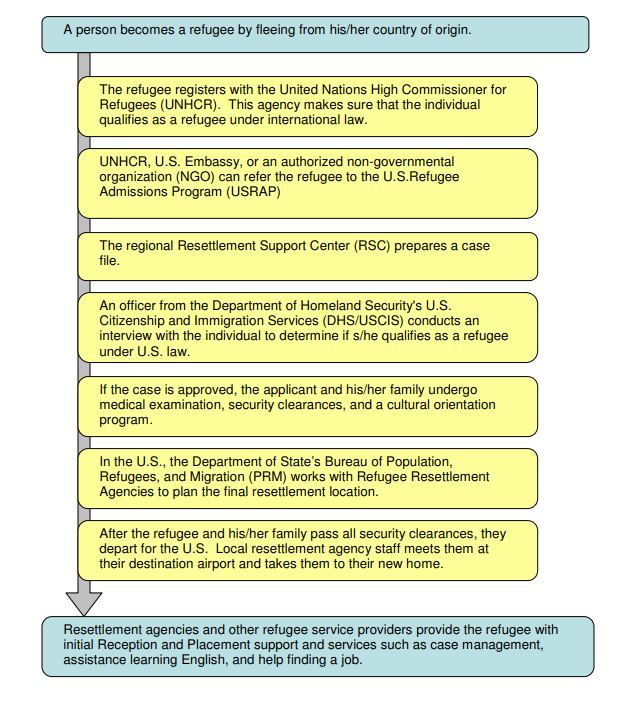 What is the Difference between Immigrants, Refugees, and Asylees?

While immigrants voluntarily choose to leave their homes and come to the U.S., refugees and asylees are forced to flee due to persecution. Immigrants may come to the U.S. with temporary visas, allowing them to remain for a certain period of time or under certain conditions (such as students or tourists), or they may have permission allowing them to remain indefinitely (such as a “green card.”) After one year of residence in the U.S., refugees and asylees may apply for legal permanent residency (also known as a “green card” though the card is no longer green). After five years, legal permanent residents may apply for U.S. citizenship.

Refugees and asylees must both meet the same legal definition of having a well-founded fear of persecution due to race, religion, nationality, political opinion, or membership in a particular social group. However, refugees receive legal permission to resettle in the United States before they arrive, whereas asylees receive permission to stay in the United States after they arrive. Those who come to the U.S. seeking sanctuary from persecution are considered asylum-seekers. Once in the United States, they can apply for asylum in order to receive legal protection. Both refugees and asylees must meet the same criteria as set forth by the 1951 UN international convention in order to receive their status.

In addition to the trauma of war or persecution, separation from family and homeland, losses of loved ones and a familiar life, refugees may also have to deal with poverty and a lack of control over their lives, living between moments of crisis and boredom, anticipation and hopelessness. In situations of lengthy displacement, refugee children may be born and raised in exile knowing little beyond life in a refugee camp.

Students can learn more about refugee youth through Beyond the Fire: Teen Experiences in War. This interactive Website chronicles the stories of fifteen refugee teenagers, who lived through warfare and fled their homes in eight different countries. Their stories are complete with photographs of family and loved ones that bring their experiences of war to life. The Web site also provides a brief chronology of the events in each country to explain how the conflict developed. These fifteen refugee teenagers illustrate the types of experiences that refugee youth encounter abroad before being resettled.

A Refugee Camp on the Web is another interactive Web site, which allows viewers to place themselves in the shoes of refugees. Through a series of slides, the Web site uses photographs, interviews and audio recordings to depict life as a refugee. Visitors must think about the same critical questions that refugee families struggle with everyday – Where to find shelter? Where to find food? How to seek medical attention in the refugee camps? This Web site illustrates the difficulties that refugee youth must overcome to arrive in safe havens like the United States.

For additional resources that outline or narrate the refugee experience, visit our Highlighted Resources for Immigrant/Refugee Awareness Instructional Materials.

What is the Resettlement Experience Like in the United States?

Ten national voluntary agencies (volags) provide resettlement services to newly arriving refugees, arranging for food, housing, clothing, employment, counseling, medical care and other immediate needs during the first 90 days after arrival. Depending on the State, refugees may be eligible for additional specialized services after that period. With some State variation, refugees are eligible for federally reimbursed cash assistance and Medicaid for eight months after arrival, after which they have the same eligibility for public benefits as other legal residents of a State. Unlike immigrants, refugees are permitted to receive federally funded public benefits. However, after seven years in the U.S. refugees must acquire U.S. citizenship for continued eligibility.

Refugees are permitted to work in the U.S., and many refugee service programs focus on helping refugees find employment so that they can become self-sufficient. Refugee children are eligible for public education in the same way as other children in the U.S., and many states receive federal funding to implement specialized educational programming for refugee children.

Once in the U.S., refugees are frequently helped by family, clan, or ethnic community networks. Many refugee groups form ethnic community based organizations, also known as mutual assistance associations (MAA), to provide mutual aid, advice and support to others from the same ethnic, linguistic or national background. These MAA’s create a critical bridge between knowledgeable community members and those who have recently arrived in the U.S. or are currently in need.

In assisting refugee families and children, service providers need access to in-depth information about refugee cultures, trauma, resulting family dynamics and the special needs of refugee youth. Culturally and linguistically appropriate staffing and services are essential, as are understanding and communication between agencies. Attending to these needs helps agencies build productive partnerships with refugee communities, provide effective services and resources, and support refugee parents in the difficult task of raising their children in a new culture.

Professionals working in the fields of child well-being and refugee services recognize the communal nature of problems they encounter, as well as the need for collaborative responses. Child welfare agencies work with a range of social service agencies, professionals and communities in assisting families and guarding against child abuse and neglect. Refugee-serving agencies also bring together resources and people from many walks for life for the purpose of supporting refugee families.

BRYCS assists diverse service providers in working together, on local and national levels, to address the complex challenges faced by refugee youth, children, and their families.

What Organizations are involved in Resettlement?

In order to assist ORR-funded agencies in providing the highest quality in services, ORR has funded a number of grants to organizations with technical assistance expertise in a particular area. Click here for a current list of TA providers!

Where Can I Find More Information and Statistics?