Bridging Refugee Youth and Children’s Services (BRYCS) is a new national program of technical assistance designed to address problems faced by refugee youth and children. We are a public-private partnership resulting from cooperative agreements between the United States Conference of Catholic Bishops/Migration and Refugee Services (USCCB/MRS), Lutheran Immigration and Refugee Service (LIRS), and the U.S. Department of Health and Human Services, Administration for Children and Families, Office of Refugee Resettlement (ORR). Our partnership is based on past work with refugee youth, children, and families, and we bring significant expertise and resources to this dynamic national program.

BRYCS developed a plan to explore local concerns regarding refugee child welfare. We spoke with refugee communities, refugee service providers and child protective service agencies about child-rearing in an effort to find out what were significant issues and concerns.

The BRYCS Community Conversations projects raised many relevant questions, concerns, and issues surrounding refugee families and their children. The following themes and service implications were raised from communities in Seattle, Omaha, and Baltimore:

1) Information generated abroad and in refugee communities about child protective service agencies (CPS) perpetuates a sense of fear, and has a significant impact on refugee families. Children may use 911 as a threat to their parents which can severely undermine parental authority in the family.

2) Refugee parents face many adjustment challenges as they transition into the U.S. They are uncertain about how to respond to new parenting challenges brought on by changes in their children’s behavior and their new environment.

Service Implications: Develop curricula on various approaches to discipline, as well as information on parenting teenagers. Materials and training should be accessible to all refugee populations and distributed widely, including to the child welfare system.

3) Access to many refugees’ traditional means of problem-solving, such as through elders and clan/tribal systems, is limited in many U.S. communities. alternate problem-solving models are not usually integrated into CPS investigation and intervention methodology.

4) In adjusting to the U.S., refugee parents may experience less cohesiveness in their families, due to their children’s quicker rate of acculturation, family work obligations, and role changes.

Our Community Conversations project was a short-term project developed to explore the issue of child-rearing in relation to African refugee  communities, in preparation for a conference on African refugees in May 2001. BRYCS recognizes that child welfare concerns affect all communities, regardless of ethnicity, location or economic class.

Refugee Community Response Refugee parents frequently identified the following as challenges for them as they transition into the U.S.: 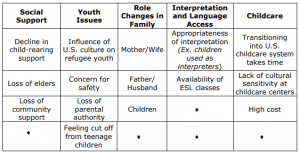 In asking refugee parents about their perspectives of CPS, the following were frequently raised concerns. (It is important to note that of all the refugee parents we spoke to, there were few families who stated they had actual first-hand experiences with CPS. There appeared to be a wide body of information about CPS, primarily negative, circulated through second-hand accounts.)

The following  recommendations came from refugee parents in response to what they thought would assist in their transition into the U.S. as parents.

In speaking to child protective service agencies, there was a varying range of firsthand experience in working with refugee families. Therefore, the responses are related to both refugee and newcomer populations. CPS staff identified the following as challenges for them when working with refugee/newcomer families. Frequently raised issues were:

When asked about refugee communities, CPS identified a lack of information in the following areas:

CPS made the following recommendations when asked what would help them in their work with refugee/newcomer families:

BRYCS is currently compiling an executive summary for each city. If you are interested in copies or have any questions, please contact kmccarthy@lirs.org.

Reproduction, in whole or in part, for non-commercial purposes (that is, use of the work in a manner in which nothing of value is exchanged) is permitted with the following notice “Reprinted with permission of the Bridging Refugee Youth and Children’s  Services (BRYCS), a joint project of Lutheran Immigration and Refugee Service (LIRS) and U.S. Conference of Catholic Bishops/Migration and Refugee Services (USCCB/MRS).”

BRYCS is supported by the U.S. Department of Health and Human Services, Administration for Children and Families, Office of Refugee Resettlement, under contract # 90 RB 0009.